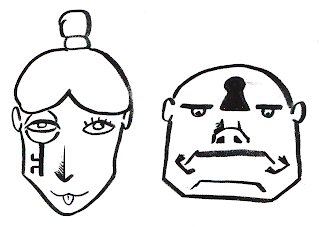 The purpose of a wall is deny access to a location, the purpose of a tunnel is to allow access to a location, the purpose of a door is to do both. Ironically many of the thaumaturges who devote themselves the most to doors must blind themselves to this fact if they want to practice the secret Arts of Key and Lock.
To iterate, a door is meant to be semi-permeable. If it allows everything through or allows nothing through it's not a good door. At the very least they should be easily let people pass, but keep temperature and spirits on one side of the threshold. A door can be more selective in what it allows through with other methods like locks and guards and riddles. A door can be less selective by other methods such as being light enough that the wind can open it. But in any case, it is paramount that it both allows and denies. Doors are not the only domain where such a pattern is observed. Your skin both traps heat within you and sweats it out to keep that you need boil or freeze. Rope is tied in knots that are both sturdy and easy to undo, so that sails are bound or unfurled in response to the winds. Communities accept and reject people based an numberless traits, thereby establishing their identity. Law tells what people can and cannot do, theoretically to support justice. People accept and discard countless things and thereby define who they are. Differentiating things is vital for anything to survive and make sense of the world and have free will, and is the ability that is sacrificed to the Key and the Lock.
Key and Lock Arts are a simple metaphysical exchange. It's a promise that when presented with a specific 'yes' or a 'no' question your answer will always be the same regardless of circumstance, but in exchange the 'yes' or 'no' becomes a 'YES!' or a 'NO!' that the universe is compelled to listen to. A Key adept of doors can enter any building but cannot close the path behind them. A Lock adept of doors can barricade themselves inside any building but trapped inside once they do so. This begs the question of what happens when a Key adept tries to open a door that a Lock adept is keeping closed, for that I'll define a scale to measure magical might by.

Some magics are stronger then others. Some arcane bindings can only hold back ghosts, while other cannot be breached by the gods. Magical forces that can break through barriers also vary from being able to shatter weak barriers to forcing all doors to open before them. Here are some rules for how to rule that.
In a scenario where two magical Forces are pushing against each other. Figure out which rank of power each Force has, the one with the higher rank wins. If they have the same rank, the the defending Force wins, unless the attacking force can find a key (such a dragon's True Name) or an opening (such as a momentary lapse of concentration) in the defending Force. If neither is the clear aggressor, the Forces are stuck in a grapple until something changes (such as one side growing tired and leaving an opening for the other). Finding a key or an opening can be thought of as lowering an opponent's rank down one.
It is known that casting magic is an act of Will, so enchantments are ranked by what is the strongest Will that cannot break from it. Note that offensive and defensive ranks in a given situation do not have to match up. Demons can often be Trivially held back with a simple gesture while being capable of Strong possession. Likewise a human with a good head on their shoulders and a Strong heart is unlikely to be capable of even Trivial possession.

This ruleset is MOSAIC Strict and arguably unnecessary because you could probably get the same result by just using the everyday definitions of Trivial/Weak/Strong/Great to describe how powerful magics are.

You can take the same Key or Lock Arts multiple times by taking the Art in different domains. A domain can be practically anything as long as the actions of 'opening' or allowing and 'closing' or denying can be applied to it. However make sure to keep it consistent. When a player takes an oath Unbarred or Contained make sure to come to an agreement with GM on what that oath applies to and write it down somewhere for future reference. Here are a list of possible examples.
This ruleset is MOSAIC Strict if you include the Unstoppable Force vs Immovable Object rules, otherwise it's MOSIC.

I've been picking at this post for at least half a year, and have been mulling over this concept for around a year, but probably longer. The influences for this subsystem consist of the Knock principle in Cultist Simulator, Arnold K's Door Wizard, my CompSci classes and a character one of my friends back in high school made up. The character was a robot that opened doors but could not conceive of and/or fell into existential dread over the idea of closing them, his name was Doorbot. Also shout out to a special someone who willingly discussed if Key adepts can rip pieces of paper or not.
Actually I started writing this post shortly after the time that the Pyromancy Delta dropped. The clever idea I had at the time was that there would be separate Key and Lock delta trees that would eventually merge into a a Thresholds tree that is a synthesis of the two. To gain the Threshold templates you would also have to lose Key and Lock abilities. Also lower ranks were going to be almost mundane roguish abilities that would eventually give way to more and more supernatural ones. Also I wanted it to follow a 'cops and robbers' theme where both Key and Lock deltas have abilities that make sense on both sides of the law. I didn't get far with this plan because it turned out to much for my tiny brain to handle, so this sat in drafts until it occurred to me to take the "open any door, but you cannot close them" template and just expand that into it's own thing.
I'm happy with how this system turned out. Like always I end up writing an elaborate magic system that has interesting setting implications but don't house it in a specific setting where those implications can be explored. I really need to make a setting and stick with it long enough to get something cool out of it.
Posted by Gorinich at 3:06 PM