Last minutes submission into the Parasite challenge. I would come up with a nice lore introduction, but I don't know where they come from, just what they are. 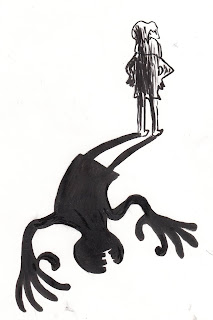 For each Umbrant template you get +1 Stealth.

Note: You eat rations at the same rate as anyone else, but instead of physical food you need to use your various abilities.

Shade: You don’t have a physical existence in the traditional sense, but neither do you act as a normal shadow. Your form doesn’t stretch or warp based on lighting conditions, and the depth of your form is relative to your Constitution and Charisma, while the area you occupy is relative to your current HP. You can’t interact with physical objects, but you can interact with their shadows as if they were and this will affect the object that’s being interacted with. For example, if you punch the someone’s shadow, they will feel being punched.

Physically attacking you does nothing unless it’s magical or able to harm ghosts. Sudden bright lights that disturb your silhouette deal damage to you as an explosion of that size and shadows of objects affect you physically. So the shadow of sword is a danger to your well being. In complete darkness you cannot move but can’t be effected or seen by nearly anything.

Puppet: You can burrow into a target’s shadow. If the target isn’t willing than you need to successfully grapple it into submission first, if they still resist than the struggle will deal 1d6 damage as you enter. Their your Host now. Their shadow will deepen and widen to accommodate your mass, but will react to light as a normal shadow. You can hear their surface thoughts, project your own surface thoughts into them, and eat one of their Charisma to have lunch. You can puppet them and they can puppet you, disagreements are resolved with opposed Strength checks.

Lend Power: If you allow it, your Host can use your Attributes instead of theirs own or none-Umbrant Abilities.


Curse Eater: If a curse or dark influence hangs over your Host, you can sense it. If you can call it by it’s name than you can force it to manifest as a second shadow which you can now interact with as with any other shadow. If you manage to kill it, you can eat it to sate you for d6 per HD/level or what have you days.

Unintrusive: You can burrow into shadows without the target noticing, as long as they are not paying attention to their shadow.

Call the Shadow: If your Host allows it, and only if your Host allows it, you can call their Id to manifest as a second shadow. The Id will merge back into the Host after a couple hours, but before than all three are able to communicate directly. If you eat your Host’s Id they loss 1d6 in all three mental attributes and something truly irreplaceable. They will live, but as a husk. The Attributes they lost will go sustain like Charisma gotten from Puppet.

Embrace Night: Darkness no longer prevents you from moving. You are free as freely as a fish swims through water and can choose to interact with shadows as either solid or medium.

Design Notes:
Something I've noticed about many of the other parasite classes is that a lot of them are closer to symbiot in function. Which makes sense because a truly parasitic class would either have to consist of unfun PvP or game of "how do we get away with hireling exploitation?" So what I decided to do is to allow this class both help and harm people and the choice between being a parasite or being symbiot is one you make in game on a case by case basis. Of course Umbrants aren't going to harm players bu the same code of conduct that players don't stab each other, but with NPCs you could have interesting interactions. Umbrants can be seen as monsters or healers and both views are perfectly valid. There is space for interesting ethical conundrums, which is one of the things that interest me in rpgs.
Posted by Gorinich at 10:10 PM