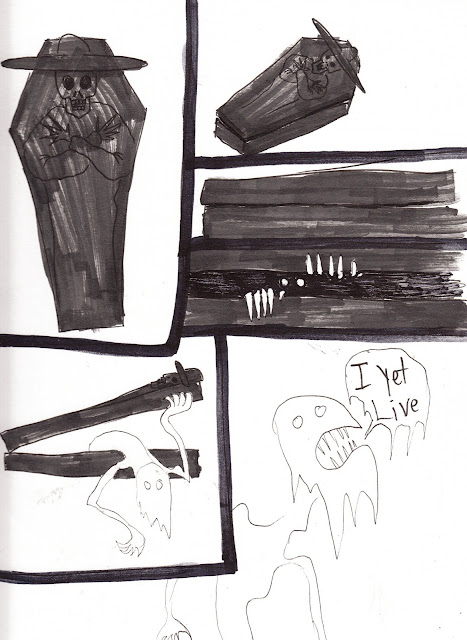 I have been very bad at posting for this blog despite having a whole free summer to do so. The reason is because rather than throw scrappy ideas out into the world I want to have them playtested a bit first which results in nothing happening because I have a problem with organizing games into existence. Which kind of defeats the point of blogs, at least for me, as my goal with blogs is to write things consistently. So, I'll post another magic system post soonish. Also a questian to my meager readership, should I expand this blog to cover topics outside of rpgs or should I make another blog for random musings? Anyway to the content of the post.

In the OSR discord's GLOG pit there has been a challenge recently to make make Curse classes. They act like classes, but with a few major differences. First is that rather than something the player choices, it's something that's inflicted on them, werewolf bites, pissing off the wrong gods, falling into a horrible pit and so forth. The second things is that they override normal class templates. If you already have 4 templates, than your last one get's replaced. If you have 3, than you can't choose your last until you break free of the curse and so forth. Other people have already discussed why this is a neat mechanic already, the only thing I have to add is that by taking up the same limited slots that classes occupy, it neatly prevents concept bloat. If becoming more of a werewolf makes you lose your wizard powers, than that keeps a character more coherent than if they are 30 different things at the same time. My entry is deliberately meant to play off how the curses make you lose things, in fact I made a curse all about losing things.

While it may seem that the world is made of physical things, the truth is that it's made of concepts. Concepts like things, are vulnerable to entropy, but usually at a slower rate than we can perceive. Sometimes however the rate can be rapidly accelerated, and sometimes the concept being forgotten is a person.

Ways of gaining the Fading Curse:

The Fading Curse:
For each template of this curse, gain 2 Stealth.

Stranger: All your casual acquaintances forget you and your name is erased from mortal governmental documents. When you meet a new person they will forget about you as soon as you leave their presence, unless you really give them something to remember.

Ignore Me: You can cause a specific person or group to forget you forever by exacerbating the curse. Each time you do so, roll for Fading as described in the ability below.

Fade: Your grip on existence is thin and unstable. You have 3 d6s that are called Existence Dice to represent how close you are to the abyss. You have to roll your Existance Dice once every month. If you roll doubles when rolling your Existence Dice you don't gain another Fading Curse Template, if you roll triples than you lose one template, otherwise you gain the next Template.

You can temporarily increase the amount of Existence Dice you have with the following methods.


Stranger 2: Your allies and enemies forget you, and you disappear from written recorded that people actually care about like newspapers, novels and diaries. Hirelings will forget about being hired. Strangers will always forget you after they stop looking at you and will usually ignore you away if you do nothing weird.

Identity Theft: You can take other people's reality for your own. If you successfully impersonate someone you can get a temporary Existence Die, and the person impersonated will gain Template A of the Fading Curse.

Stranger 3: The people who care most about you, your loved ones and nemesis forget about you, also your name vanishes from divine records, meaning you don't have an afterlife to speak of. Other player characters also forget you at this point, they can still rely on you out of character, but in character they must rationalize your existence away.

Specter: Your physical form becomes more of a suggestion than a reality. You no longer look a fuzzy vaguely humanoid mass. You can fit thought any crack and fudge the specifics of what you physical body is at any given moment.

Nobody: You have forgotten yourself. You can't be targeted, or understood. If you are called by a name, that name will become your new Identity and you lose Template D. Few are able to recognize what you are so it's a bit tricky. Children, madmen and the psychically gifted might feel your presence. If you Fade again, than you cease to have ever existed.

Other Entries:Words for Yellow: Vampires, Wendigos and more!
Archon's Court: Nanoweapon Poisoning
Walfalcon: the Skablin (?)
A Blasted, Cratered Land: Hero (aka Destiny)
Anxious Mimic: The Oath
The Benign Brown Beast :the Restless Dreamer
Princesses and Pioneers: Mirror-Struck
Parasites and Paradoxes: The Doppelgänger
Bubgear Slug: The Abattoir God
Nuclear Haruspex: The Undying (and the originator of the idea)
Meandering Banter: Wizzard Bidness
Of Slugs and Silver the Ogre