GLOGular Settlement Challenge: A village on the river Sword.

Continuing my habit of posting my Glogular challenges I present to you the River Sword. 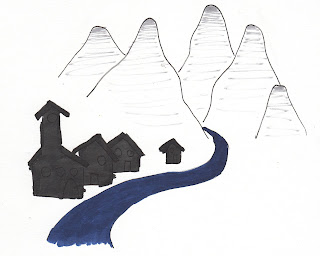 Some legends say that the river Sword was the weapon the gods used to slay a great demon, others claim that it's the Ocean's attempt to murder the Bearclaw mountains in the convoluted politics of elementals. Regardless of the reason, unlike other rivers, the Sword flows from the ocean. Unfortunately for would be entrepreneurs, the rocky foothills it snakes thought usually leave splinters instead of boats on the way up. When the river finally levels out, it results in a most unique salt water ecosystem that nobody cares about because biology hasn't been invented yet.

People have settled into a town on the Sword, far from the bustling cities. The towns folk quietly work during the day, and keep inside by night, far from the concerns of lords and wizards.  Like many settlements that hug a river, it's called Sword as well. The most traffic it receives is from those making one last stop before heading up the Bearclaw or to be ferried across. Other than that, it has a modest population of around a hundred, and everyone knows everyone else. City slickers are treated fairly coldly by most of the populous. Here are the 6 people adventurers from out of town are most likely to interact with. 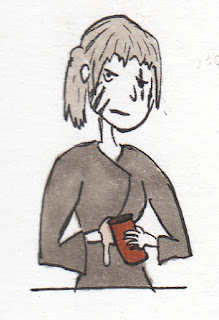 Brery the Barkeeper:
Is known in town for uppercutting a bear that one time. She has scar on her face and a no nonsense attitude. Her main concerns are running her establishment and how she's going to start a family in this economy. By default she's not going to trust outsiders farther than she can throw them, but will allow them to stay in the barn. She will try to pressure travelers to drink a pint of the town's special cider, which is incredibly strong. Roll a poison save vs passing out if you drink it normally, your fine if you sip it thought. Wither or not she likes you depends on how much of a good sport you are about the cider. Knows a lot of people out there. 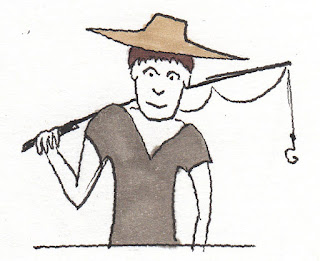 Lyan the Fisherman:
A hunk, the town's most eligible bachelor. Considered the most manly man in the town but secretly maintains a beautiful flower garden that he pretends his aging mother is taking care of. Everyone likes him and he can easily get the town's population of young men to do some task together. He's a bit too trusting and if you you can convince him of something, you can leverage his social circle. When not shepherding or gardening is found at the bar with his bros. 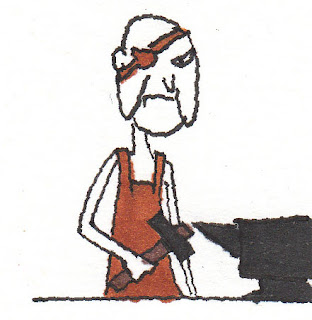 Harric the Blacksmith:
One eyed, shriveled like a prune and grouchy. Doesn't like other people and only deals with them when he has to. He's a master at his craft and knows the secret of making immovable rods. Give him a month and he can make a cat size metal object that has the properties of an immovable rod. He keeps this a secret, but a number of the newer houses in the town hang on immovable nails with his trademark. Even if you do figure this out, getting him to sell something would require even more convincing. He wants to A) not have to talk to people B) smith things C) his daughter to be happy. 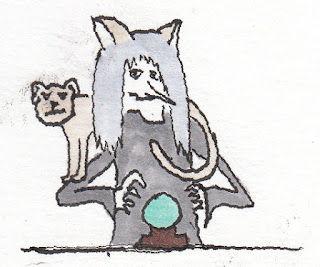 Rewitte the Witch:
Is an old woman with cat ears, and a mangy familiar that has human ears. His name is Moris. She is the local midwife, medium, apothecary and general purpose wise women. Everyone in the community respects her but also keeps their distance. Her primarily concern is keeping the town safe, and for that she wants information on what is going on afoot. She will provide medical care and her necromantic powers for knowledge about incoming threats and favors that help the town. She also completely a gossip and will love to spill tea while with oat cookies and pinecone jam. 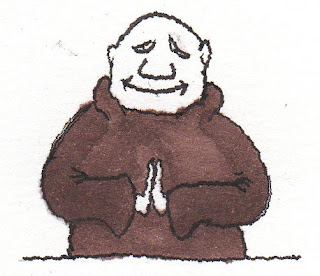 Kerick the Priest:
Likes to eat cherries, there's an embarrassing amount of cherry pits in nooks and crannies of the church. Despite this being his home town, and all the time he's led the congregation here, he feels like an outsider, due to the time he's spent in the city. His flock however accepts him perfectly well and have forgotten he's ever left. While he was in the city he tried to balance being faithful with politics, that led him to being shuffled back to his backwater hometown. He's abandoned the struggle for temporal power to serve the spiritual needs of his community. He still knows people back in the city and can give the players a letter of invitation if he believes their cause is righteous. He offers hospitality and place to stay for weary travelers of his faith and heathens who are willing to convert. 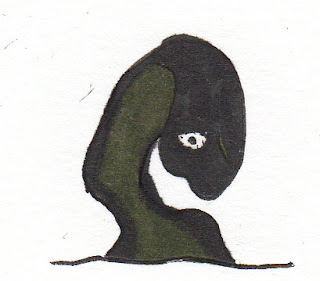 Wild Thing:
It's not a demon, and it's not an angel, it's a human but not a beast, only thing for sure is that it lives in the river. Most of it's kind don't care for mortals and ignore them, but this one has watched them for millennia and desires to be one. It thinks it understands humans a lot more than it does. It thinks human life is all fun and games, and a lot of the nuances of human interaction are lost on it. It has zero facial recognition for human faces, instead relying on hair color, clothes and houses to identify people apart, but it can easily identify metal tools from the eye the Blacksmith gave it. It will trade pieces your humanity for weird magic things and haphazardly say occult secrets that are just common knowledge among it's kind. But it won't coerce or kill to gain humanity because killing is bad.

Other Entries:
Ortish Colony by Words for Yellow
Nahemot and Ezra, the city of noise by Alone in the Labyrinth
January by the Benign Brown Beast
A living, moving city by Parasites and Paradoxes
Stones, a refuge in Hell by Two Goblins in a Trenchcoat.

The Grain District by Of Slugs and Silver
Posted by Gorinich at 6:24 PM