Session Report: The Adventures of Sibub and some rule tinkering.

So I ran a session of Pyrrhic Weasel with my littler brother. Pyrrhic Weasel is a game system made by Jones Smith/Screwhead Mcduff on his blog and can be read about here, here and here. However I made some modifications. Instead of 2d6 the dice mechanic I used was rolling a pool of d6s and if one of them comes up with a 6 than you succeed. To reflect this change I decreased the ranks of starting Motifs by one so that you wouldn't be rolling 5 dice at the beginning. I kinda goofed with how Training was converted which I'll explain after I show the character that was generated. I choose not to touch Paths because I'm still getting a handle on Motifs. 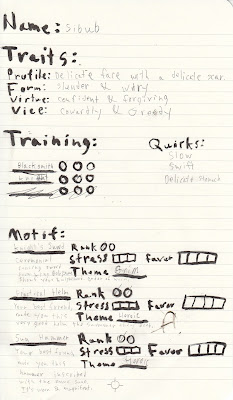 Other things that aren't written down but are part of the fiction: Sibub is a human who was raised in the gnome kingdom (gnomes and dwarves are equivalent) and his best friend was a gnome.

Character generation was fun but ended up taking somewhere around an hour of rolling and discussing to iron out the details. The motifs are very good for ironing out a character and their story. An issue that came up was that I ended up with coming up with more interpretations that my brother and ended up having a lot of say in how Sibub turned out.

Now with the Training thing, I only realized when we got to it that I misunderstood that you get one Training, as I was planning to use it as the main source of dice pools and assumed there would be three. Since me and my brother couldn't come up with a third thing for Sibub we went with the two that made sense and I ruled that they would be at one and two ranks.

The rune suno relates to the magic system I made months ago and will write a blog post about once I've gotten at least one session where it's playtested.

The Session:
After Thoughts:
What went well:
Character creation was interesting. I was able to improvise things alright. I don't feel like it was my A game, but these things come with practice and this is my first game in many months. This session didn't end up having any dice rolls or compromises, which I think is alright. Next session should have a big fight.

What didn't go well:
Me and my brother weren't always on the same page of what the other was saying. This is also a thing that improves with time. I don't like how motifs work at the moment, specifically how non-diegetic themes are. I have a tweak for this that I will mention lower down.

Questions for next time:
How powerful is the Thing?
Does it fear the sun?
What is the sinister side of Gnome King Bob?
What do I need to do to have Endon ready for next time?

Pyrrhic Weasel rule variant: Monikers
While Motifs are cool little bits of story my issue with them is that items that are all important to someone don't fit in my personal appendix N (which I could probably dedicate a post to describing) and doing good for the sake of fueling your sword seems weird to me if that sword is not literally Excalibur and explicitly powered by hopes and dreams. I've already written something similar in this post, where I made levels diegetic by tying them with names and applying the trope of names having power.

In this variant Motifs are replaced with Monikers which are almost mechanically identical except for the fact that they are names instead of items, and instead of a Theme, each Moniker has it's own Purpose, which is a bit closer to a Goal. Or maybe keep the Themes I'm not sure yet.

Monikers are also explicitly diegetic, in that it's known to everyone that names have power. Stress represents a name that's overused loses it's meaning, in the same way that repeating a word to many times makes it devolve into a collection of sounds. Actions that fit a Moniker's Purpose/Theme instead reinforce the meaning and make the name more true. Another note is that because rolling only happens when your at the edge of your ability, it's not your skill that matters, it's the strength of identity that decides your fate.

To get back to my original complaint "I do a good/bad thing because my identity as a Hero/Villain demands it" seems more natural and something that can be applied more broadly.

Training no longer exists in this variant. Instead, there's a new category of traits called Background which covers upbringing, education, culture and all that jazz.
I might just be allergic to assigning numbers to skills in general.

The only issue is that Monikers would need an equally fun set of tables to define them like Motifs have, which would require some tinkering to come up with something that works. Also maybe you start with only one Moniker and have to gather more as you go along? I don't know.