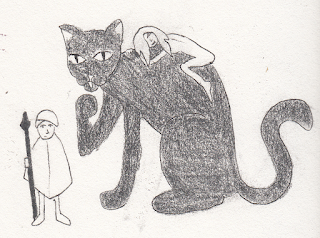 Based off the prompts of black cat and tribe I was thinking of a tribe that has witches who ride big black cats but I can't think of anything for the tribe I've only got an idea for the cats.
The idea is that these witches use magic to make the cats huge but because magic is fake as shit, the way physics are applied to it is scaled incorrectly, because it's not "truly" huge. From the cat's perspective it's the world that's in miniature. For example the squared cubed law is ignored, they can jump just as high as they are used too jumping, if the cat could originally jump 1 foot, and it was scaled up x10, then it now jumps 10 feet rather then what an animal of that size and weight should be able to jump. They still weight as much as a house cat when in regard to the question of can something can hold their weight, even if they have a person riding on top of them. And they would still react to dogs and loud noises as if they were their natural size. Part of their traits would be "as tiger" and part would be "as house cat", but I'm not sure how to divide it. The simplest would be "whichever one is more advantagous" but I want there to flaws in this magic. Like for example should they have hp "as tiger" or "as house cat"? I'm sure that I want them to "eat as house cat, but move magnitudes faster with all the trace of a housecat" to justify witches riding them and lead too cool scenes like them sitting on something that big should not be able to sit on. I'm imagining these cats being animated in a Ghibli film, so that's the sort of magical aesthetic I'm going for here. I don't know I'm rambling, the day has been long.
You know, would my kind readers post their takes in the comments, let's have a bit of a discussion going.
Posted by Gorinich at 11:12 PM