There are problems where the difficulty is not in coming up with a clever solution, or fighting against a foe that opposes you, but in perseverance. Sometimes you need to push against the world it doesn't feel satisfying for the GM to say either "Yes you do"/"No you can't"/"Hm, make a check against it." 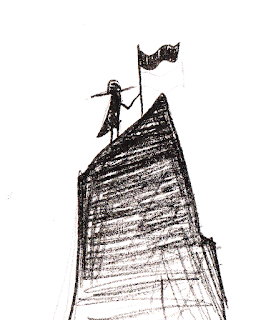 It makes sense to call for this procedure if your character is preforming a task that is at the edge of their ability, would be tedious to play out in full or is in some other way a test of endurance. It's recommended to only use this procedure if both success and failure are interesting and/or you want the resolution of the task to be drawn out and dramatic and how much the character is able to endure matters.
Examples of tasks this could work for:
The procedure of a Test of Grit is as such:

Grit represents the assets that a character has too complete a task. It's some combination of willpower, experience and luck that allows a person to push forward against the odds. For long term tasks, consider factors abstractly across the entire period.
If your spending a month combing through the Library of Tears for the soul of your father, skipping a single meal won't lose you your well fed bonus. Surviving only the salty tears of the Librarians for that month will however have a negative effect.

Adversity Die is a d6 represent the myriad misfortunes, frailties and mistakes that stand before you and your goal. They represent outside influences, but also the parts of your body and mind you don't have full control of. Pressure represents how errors accumulate over time, and how they might overwhelm you.
There are three Challenges you must face to accomplish your task. For each challenge must roll the Adversity Die and add this value to your Pressure. If your Pressure exceeds your Grit then you have failed the task and the procedure is over. Describe how you overcome or succumb to the Challenge. In between each Challenge you can Take a Risk to improve your Grit.
The first Challenge is the Challenge of Starting. Succeeding here means your able to start off. Failing this task means you were not able to begin the task, or fail almost immediately.
Examples include not managing to find good grip on the boulder your trying to lift, or not working up the nerve to start your novel.
The second Challenge is the Challenge of Enduring. Succeed here and regardless of the setbacks along the way, your able to keep the momentum. Failing means you do not.
Examples include giving in to the heat of the desert sun or letting your gang lose track of their goal and collapse into infighting.
The last Challenge is the Challenge of Ending. Success mean your able to conclude the task correctly. Failure means messing up at the last moment.
Examples include failing to stick the landing or ruining your ink illustration by overshading it.

Sometimes to accomplish things you need to take Risks. If you want to take a Risk to improve your Grit, you need to come to an agreement to come to an agreement with your GM what sorts of Risks you can impose on yourself when to improve your odds.
For example, let's say your trying to lift open a heavy iron gate for long enought that the rest of the party is able to pass under it. Some possible Risks in this situation is that you break your back from the strain or you crush your foot when you drop the gate down again. Or let's say your taking several months campaigning for the election of President FROG. Risks you could risk in this situation include alienating your wife or burning out from neglecting your obligations or health respectfully.
Once you've agreed on what the Risk is, you assign it to any amount of the sides of a d6. If an Adversity Dice lands on one of these sides, then the Risk comes to pass, in return you get a bonus to your Grit equal to the amount of sides that have Risks assigned to them.
In the gate lifting example, if you assign one to the Risk of breaking your back, then you break your back if you roll a 1 but in return you get +1 to your Grit, this is entirely independent of if you succeed the task or not.  If you assign this Risk to 4, then you break your back on a4, and you still get +1 to your Grit. You can assign this Risk to 2 and 6, which would mean that you will break your back on a 2 or a 6, but in return you get +2 Grit. You can even decide to assign the Risk to all sides, guaranteeing that regardless of success or failure your back will break, that +6 better be worth it.
You can assign as many Risks as you want, but you can't assign more then 1 Risk to any dice face.
In the gate example, if you decide to assign the Risk of a broken back on a 6, you can also assign the Risk of crushing your foot to a 5 or 3 or even the rest of the sides, but you can't assign it to a 6.

The main reason why I was motivated to write this system is because I anticipate that I will need them for the games I want to run. The games I want to run being FKRish games the rules being used are MOSAIC procedures and Δelta templates. A lot of the Δeltas ask you to complete tasks where the difficulty is in endurance. Which is a hard thing to model in an tabletop rpg, especially one where you don't have attributes and stats to to model the fatigue of the character. There is a disconnect between the fatigue of a player and their character, on the player's end "I walk to the door" and "I walk across the desert" take up the same amount of effort. Now a lot of this can be resolved by simply thinking out the logical consequences of each action "If you try to walk across the desert right now, you'll die of dehydration, are you sure you want to do that?" for example, but in other cases it's not clear as clear cut. Let's say your a sensible person who sensibly wants to achieve the sensible goal of becoming an Eye Watcher, how many times does the GM need to make you roll to see if you can force your body to stay awake? If you are learning Discipline, it's easy for the player to say that they meditate and practice calisthenics for a month, which is an issue because in real life and in fiction doing so requires concentrated effort. So I wrote a way for players to Test their Grit.
The process of mustering Grit was something I directly stole from matthias's Quick Combat, because it's a nice way of converting diegetic elements into numbers you need right now. The Grit mustering criteria I chose broad fall into one of five categories.
There are 3 Challenges where each die is rolled separately rather then rolling 3 dice at once to add drama and tension. The opportunity to Take a Risk between rolls is place to give players more control in the drawn out process and also to add drama and tension in the form of asking the player what their willing to risk to succeed.  The 3 Challenges of Starting, Abiding and Ending are the way they are because they are scalable, an event that lasts a second and one that takes 30 years both have a beginning, middle and conclusion, so the same math can be applied to both. Also on what stage you fail can change the fiction, not being able summon the courage to walk on coals is different from jumping off while half way through. I don't think this is always relevant, but it can sometimes be.
I think there are still some rough edges in this module, and I'd need to see this system in actual play to sort them out. Also half way through this I was amused to find out that I structured this text like a function in a program, with an list of instructions that reference sub-functions. I guess college is doing something for me.
Posted by Gorinich at 7:46 PM