This year for the Secret Santicorn I received a request from Nick Roman that goes something like this.

A dungeon/adventuring location set in a dreaming mind. Are you rescuing them from a curse? Stealing a memory in an Inception-style heist? Trying to undo their amnesia and find their hidden true self? You decide!"

So, here's the thing about dream trying to create fiction that evokes dreams, if hard because the waking mind does not think in dream logic. Lucky I think the texts produced by GPT-2 have the dreamlike quality of almost but not quite making sense, so I've come up with rules that use Talk to Transformer as a secondary GM in charge of dream sequences. I don't know how good of an idea this is but it could work. Now, what I have is less of an adventure, and more rules for creating adventures, as a large part of the content is generated by a computer. Also someone please stop me before I end up writing a whole setting. 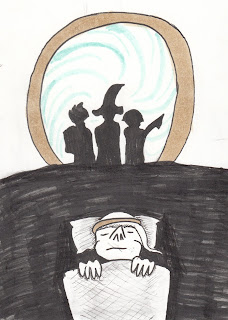 The Lore:
In recent years a strange kind of artifact has been discovered in the ancient ruins under our fair city. Gates have been dug up that allow you to enter the dreams of others. Each Gate is this ring about two horses in diameter and as thick as mast tree. From the touch it's smooth and almost warm like horn, and each Gate is unique in color and the pattern of it's ridges. Which is good because each one has a corresponding Crown that looks like the Gate in miniature. By themselves the Gates and Crowns are just feel in explicable alive, but when a Crown is put upon a sleeping person's head, than something magical happens.

The space within the Gate unfolds, and you can step into the dream of the sleeper. The dream is not like the waking world, it does not follow rules, at least not ones that make sense to us. However the world of dreams is also the world of thought, so the presence of a waking mind disrupts the flow of the dream, causing the "lucidity" of the dream (which is separate from the lucidity of the dreamer) to ripple out and swing like a pendulum. The common parlance among Psychonauts has come to refer to the periods of greater dream logic as "High Tide" and periods of higher lucidity as "Low Tide". But who can make out what the Psychonauts babble, it would be easy to pass them off as lunatics, stringing together patterns from nonsense and spewing philosophic drivel if the things they brought from the dreams were not so real.

At the time of writing, less than thirty compete sets have been discovered, and despite there not being any real understanding of where they came from and why, the public has really gotten excited by these circles. Dream exploration has become a cottage industry, and one that aims to help with so many psychic ills. Feeling depressed? Do not worry, it can be taken out by our best men. Have your been dreaming of writing your own perfect play, or marrying the perfect wife or having the perfect suit? Well, if you can dream it, we can fish it right out of your skull. Wish you could learn the classics but don't have time or energy? Well, we can  just take the classics, and shove them directly into your subconscious, no problem. Trust in us and our expertly trained Psychonauts!

There have been rumors that there is a dark side to the dream exploration business. That, the Psychonauts might rearrange a personality for their own ends, that sometimes they go in so deep that they can no longer get out, that sometimes nightmares escape instead. All baseless rumors, I assure you.

The Procedure:
Tools: A computer of some sort with access to this site. Fore the sake of convenience I'm going to refer to it as Transformer.
Setup: The GM sets up the computer with the site and writes "Dream Gravity" somewhere visible.
The Notes:
The way I have this system setup is to enmesh the Talk to Transformer website with a live human GM, I know AI dungeons exists but I haven't been able to figure it out so I wrote rules around the tool I understand. The concept of High and Low Tide is introduced so that there is a diegetic explanation for the changing between paragraphs of almost coherent computer narration, and normal OSR play. If there's a tangible in-world difference between the two states, than rather than being a weird game abstraction, it's a way to support the fiction of exploring a surreal dreamscape.

I made the main consequence of dream exploration a push-your-luck mechanic because the normal consequences of death and bodily harm don't seem quite relevant in this context. I like being stuck in the dream as a consequence, it tickles the part of my brain that likes tropes like "don't eat the food in fairy land" and "spend to much time transformed into a bird and you might forget you were every human". I don't quite have the words to explain why this feels right, and that's no accident because this subsystem is all about the relation between the conscious and the subconscious.

Dream things are meant to be the treasure that draws players to engage with this subsystem. The fact that each dream things a part of someone's soul serves the purpose of preventing the Gates from being free magic item machines and creates meaningful impact for the game's characters and world. The teleport-into-sleeper's brain that dream things have is a fail-forward mechanic. In that it provides an escape route for when your in a tight spot, but one that generates it's problems. Like how do you get out of the brain once your in there, and how is the npc going to feel once you teleport into him and so forth.

The sleeper wakes up when the party pulls out to prevent players from just quickly going in and out of the dream to reset Dream Gravity. Meaning that players generally only have expedition per person per night, which has the additional benefit that players get to see how they are changing a character's personality over time. Players can use drugs and sleep spells and other methods to get their target back to sleep, but that's ok because there is some opportunity cost of money, spell slots and side effects in some way.

The Hooks:
While most of the adventure is generated in the computer, there is room to come up with why the players are going into someone's dream.